Very weird that I can’t quite recall whether or not I read The Great Gatsby in high school. I recall my sister reading it and going on about it… but me?! Eh???? I’m a huge bookworm so this is quite unusual because I tend to remember books I read–whether I loved them or not. It probably doesn’t help that I’m not particularly drawn to the Jazz Age (of any part of the world), but hey, we all got our things.

I initially cringed at the thought of seeing the exceedingly *blinged-out* movie version of a story I was already ambivalent about.

But with that said, it wasn’t half bad either.

I still feel that the whole soundtrack thing was a big no-no for an era so engulfed in jazz, but at least it didn’t dominate the movie’s 2.5 hour long duration. (Thank God!) 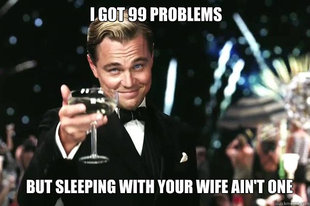 I also didn’t quite get mentioning Daisy’s daughter early on, only for her to appear for mere seconds at the movie’s ending. (Screams kinda pointless to me.)

I got the vibe that the story line was all ‘coming back to me’ as I was watching the movie, so I’m thinking maybe I did read the book after all? But even if I have, it’s been well over a decade since… And while I may not have cared for it much before, I feel a re-read coming up in the near future.

The Girl Who Reads

“You can never get a cup of tea large enough or a book long enough to suit me.” ― C.S. Lewis

Musings and books from a grunty overthinker

It's time to get hella serious about writing!

Now based in France!

Epic Corners of the World

What Inspires Your Writing?

A blog dedicated to writers...and the people, places, and things that spark their creativity

A bucket list blog: exploring happiness, growth, and the world.

this is... The Neighborhood

the Story within the Story

A Library of Literary Interestingness

A self deprecating real life depiction of hap-hazard wandering in the Americas south of the equator.